Wow! Rudolph thought to himself.

What a night!
Rudolph woke up covered in sick and lying in a heap next to the toilet, using a towel as a blanket.
His cashmere scarf was ruined after he used it first as a Rambo-esque bandanna at the Beer Lodge whilst breakdancing to Run DMC’s, “It’s like that and that’s the way it is”, and second, as a tissueafter he threw up and got more down his front than down the toilet.
It was in dire need of a visit to the dry cleaners.
Big Brown Bear was snoring so loudly the windows in Rudolphs house were shaking. He was hanging half on the sofa and half off it, with a beer still perfectly balanced in his hand, thus avoiding any spillage – amazing how men perfect this skill isn’t it?!
Top Gear was still on (does it ever turn off??) and there were beer bottles strewn all over the floor.
“All signs of a good night!”, Rudolph thought to himself, “But I feel like someone has turned me into roadkill though”. It was totally worth it for a night out with his bestest old buddy though.
Realising all his fur was matted to his skin, and that he looked like he had been hit by a truck as well as feeling like it, Rudolph decided to jump in the shower. After that he decided he would pop to the shops to get some eggs for a good old fry up and then go on to the launderette to freshen up his scarf.
He finished up in the shower, used his under eye dark circles moisturiser to try and alleviate some of the puffiness (yes, even a Reindeer has a beauty regime better than my own) and wrote a note to Big Brown Bear to explain where he had gone in case he woke up before he got home.
It was a beautifully sunny, clear and crisp winter morning. A fresh dusting of snow was on the ground and Rudolph could hear the birds singing in the trees. Despite the mammoth hangover, Rudolph felt good and practically skipped to the shop.
“Morning!” Rudolph chirpily shouted to Percy, the shop keeper penguin.
“Good morning Rudolph!” replied Percy, “how are you today?”
“I’m great thanks, I’ve got a hangover which was gift wrapped with a bow on top, but otherwise I’m pretty good”.
Rudolph went and found the eggs and picked up a morning paper to read in the launderette while he waited for his scarf to be cleaned. He also picked up a can of red deer, much like red bull but suitable for deer. Rudolph lived off the stuff when he was putting in 90 hour weeks and it made him fly like s&@* off a shovel. Magic in a can, especially when consumed alongside beer.
“Just these please, Percy,” Rudolph said.
“Very good, perfect hangover cure eggs and a red deer. I prefer to pick up a penguin myself (see what I did there, awful joke, just awful. Sorry everyone…) but eggs are pretty good too. Have a good rest of your day” Percy said.
Rudolph cracked open his can of red deer and strolled to the launderette.
When he got there, the place was empty and quiet. Perfect. He found a machine in the corner, tucked out of the way, and threw his scarf in for a wash. He sat down on a chair behind his machine and got himself comfy for a read of the paper.
FRONT PAGE: “Blitzen questioned by SPS (Santa Police Service) over suspicion of using performance enhancing drugs…”
“What?!” thought Rudolph.
“This is too good to be true! I knew that jumped up, wife stealing hunk of fillet steak wasn’t that buff just from going to the gym and drinking protein shakes. What an arse!!”
Rudolph let out a villainous chuckle.
“This is brilliant. Ruby, my ex-wife is going to hate him if this turns out to be true. This could all work in my favour…”
As Rudolph turned to page 3, he was the ‘greeted’ by the sight of something which took him from cloud 9, down to ground zero in the space of 3 seconds. He felt sick to his stomach.
It was Ruby. His ex. The wife of his kids. On page 3. In bondage gear, modeling next to a woman called Katie Price.
“What the hell is she doing?!” Rudolph thought. “She looks like she’s in 50 shades of Grey!”
Rudolph was livid. How could she stoop so low?! This is all Blitzen’s fault…
Once Rudolph’s scarf had finished drying, he threw it on (it felt lovely by the way, soft, fresh and like a warm hug around his neck – much better than it felt when he had the Gruffalo’s hands around it the other night) and stormed home.
Once he was in, he turned the laptop on a googled the story of his ex wife in the paper. Sure enough, it was true. She was everywhere, photos of her in leather and chains and strutting about like she was the next Giselle.
Rudolph vowed to sort this out and decided he would make arrangements to speak to her about what she had been up to but, in the meantime and while Big Brown Bear was asleep, he thought he may as well have a little look on his dating website – olddeermatch.com
He had a message from a rather nice looking deer called Twinkle…maybe I’ll look her up he thought. I like her great big…nose. 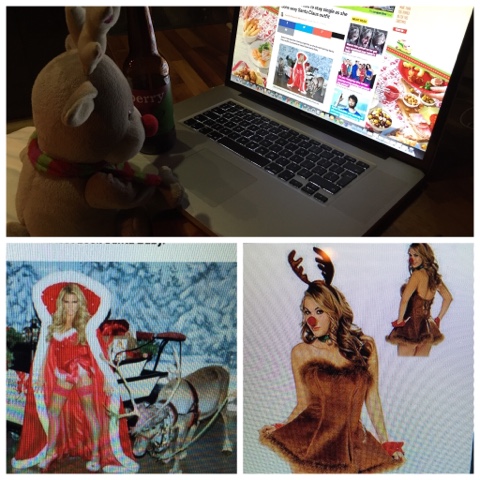