Now, I don’t know how many of you have heard the tale of, “The Elf on the Shelf?” If you haven’t, where the hell have you been?! Oh, and well done.

If you don’t know about him, let me explain…
He’s a jolly little fellow, called a scout Elf, who comes out on the 1st of December, in his festive best, and leaves on Christmas Day.
He is to sit upon a shelf, and not be touched, otherwise his magic and all he has seen will disappear and he won’t be able to report back and tell Santa if you’ve been naughty or nice upon his return to the North Pole.
You get the jist.
Cute eh? Or creepy. I’m leaning more towards the creepy camp.
So, seen as its officially the run up to Christmas now, I thought I’d do my own take on things.
Ladies and Gentlemen, sober and un-sober, I give you…

The tale of The Deer with a Beer.

(Bet you didn’t see that coming did you? Neither did I truth be told).
Over the next 24 days, we shall follow The Deer with a Beer on his festive escapades and peek in on his high-jinx.
Let me set the scene if you will…
The tale of The Deer with a Beer is a tragic one.
A tale of fame and misfortune, coupled with a fetish for alcoholic beverages.
His name was Rudolph, he was one of the most wonderful reindeer you could ever have set your eyes upon.
A glossy fur coat, impressive antlers and he wore a cashmere scarf to die for.
Snazzy.

He was the star in Santa’s fleet – one of the fat man in red’s chosen few and even had a song written about him (tell me you’re not singing it…you are aren’t you). Life was pretty darn good.
Presents were delivered on time, his internal sat-nav was working perfectly, he had a brilliant diet of organic carrots and triple distilled glacier water and he had muscle definition to die for.
As the years went by, and Rudolph began to hit middle age, he found things a bit harder.
He had a wife and family who he had to support, he was working ridiculous hours, he was forgetting the way to places he’d traveled to for years and his muscle definition had diminished enormously, resulting in him having to use a slender-tone on a nightly basis.
He began to struggle, became exhausted and just wasn’t getting the same satisfaction from his diet of carrots and water that he used to.
One snowy Christmas night, when Rudolph was on the present run in Belgium, Rudolph found a family had left a bottle of drink out for Santa. He read the label which said,
“Beer. Made from 100%, All Natural Ingredients.”.
“This stuff can’t be too bad if Santa drinks it. And it is 100% Natural,” he said to himself, “I’ll give it a go”.
He drank the bottle in one and let out an enormous belch.
(Down in one. Bravo! Very impressive for a first go).
Then, a few moments later, he began to feel as light as a feather. He felt an overwhelming sense of happiness, he felt like he had the ability to fly through walls and amazingly, he felt young again.
He felt better than he’d felt in years.
This drink was magical!!
From that night on, Rudolph vowed to drink 5 bottles of ‘all natural ingredient’ beer every day.
Forever.
To start with, he had his mojo back.
He felt fit, young and he was still the jewel in Santa’s festive crown.
He even harnessed a new magical power thanks to the beer. He found that drinking it caused his nose to glow bright red and it enabled him to light the way for Santa’s sleigh, saving Santa an immense amount of money in electricity bills.
The more beer Rudolph drank, the more his nose glowed.
And all thanks to this magical beverage.
But as time went on, Rudolph became dependent on the beer to get to work every day and it’s magical effect began to wear off.
It no longer made him feel happy, it no longer made him feel like he could fly though walls, he felt old. And tired. And drunk.
His marriage broke down and his wife left him for some other reindeer called, Blitzen. What a stupid name Rudolph thought to himself, her loss, and to make matters worse, the vet told him the red nose was not due to magic, but due to burst capillaries in his nose because of all the beer he had drunk.
(Not such a cheery festive song about him now is it…? Shame on us for singing it earlier on).
Rudolph’s performance nose dived so much, Santa had to make the tough decision to retire him early.
Santa was kind to Rudolph though and allowed him to stay at the North Pole to see out his retirement.
He now lives a playboy lifestyle there and only drinks one beer a day in the 24 day run up to Christmas.
So there you have it.
A Christmas story revealed.
One to share with the kids maybe??
No?
Alright then.
We’ll just keep this one to ourselves.
So, as promised, here is day one of; “A Deer with a Beer”.

Rudolph decides to have a dip in his chocolate filled hot tub, with a beer in hand of course, to kick off the 1st day of December.
Having one chocolate a day from an advent calendar is no fun. Have a sodding hot tub full!
“Look at my chocolaty balls!”
(Naughty Rudolph).
Tune in again tomorrow for day 2! 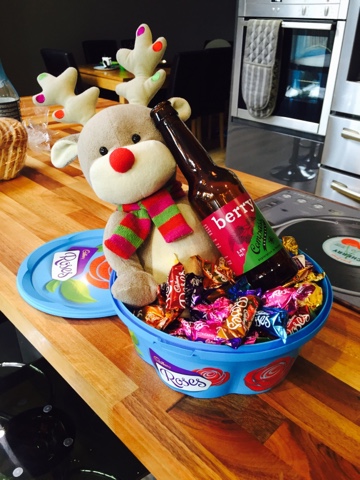