…a place where anything goes and where no means yes and yes means no.

Basically, it’s a place to go when you don’t give a sh$& about rules and you want to do whatever the chuff you like.

I’d like to visit myself, but sadly I don’t have much spare time for some reason (and you have to be aged 1-4, a minor detail).

My 22 month old visits Toddlerland every day. Mostly for a whole day, but always, without fail, between the hours of 5-7pm.

From 5pm-7pm in ‘Toddlerland’ today…

Mummy said,
“No! Don’t climb on the dinner table!” So I climbed on it.
Stuff her.
For some reason, she made her angry face and pointed her finger at me.
Whatever. I’ll give her 5 minutes and do it again.
Mummy said,
“No! Don’t play with my makeup and smash my new powder blusher to smitherines whilst stamping it into the cream bedroom carpet and rubbing it all over yourself!”
So I did it.
I opened her makeup, I smashed the blusher to pieces and stamped it into her carpet.
Whatever.
It doesn’t make her look any better anyway.
I’ll have a go with that black stuff tomorrow…what’s it called? Waterproof mascara. Yeah, that sounds fun.
Mummy said,
“No! Don’t use that Thomas Train as a spoon and put it in your yoghurt and then in your mouth!”
So I did it.
I shoved that Thomas train in my Peppa pig yoghurt, I licked his face and then, when he begged me to stop because he had a dairy allergy, I did it again.
That’ll show you choo choo train. And you mummy!
Yum, yum, Peppa pig yoghurt on a train.
Mummy said,
“No! Don’t put your hands on your willy when it’s covered in poo!”
So I did.
And I got poo poo all over my hands and put them on my face.
That’ll show her.
That stupid mummy.
I don’t care that I smell worse than a cow that’s sat in its own pat, she will have to bathe me and deal with it.
Hahahahaha!!!!

“Where the word no means yes and yes means no.”

Free entry for under 4’s. 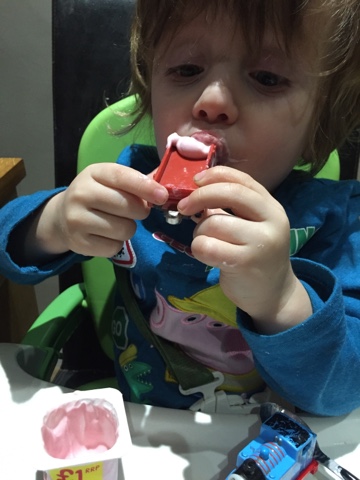