Deer with a Beer: Day 10
(Oh my good lord…only 15 days to go!)
It was another glorious day in Lapland, the place, not the lap dancing club.
Rudolph was reaping the rewards from his intensive workout regime and his strict diet.* He was looking more and more buff (think David Beckham with Antlers and lots more hair…actually, don’t. That’s a very weird image) and his confidence was soaring.
*on that subject, I had vowed not to eat rubbish myself up until Christmas Eve because “’tis the season of eating so much you feel sick and then crying about having to jump around the house just to get your jeans on” but I’ve failed miserably today and eaten a shortbread the size of my head along with some hot chocolate…curse you festive cheer!!!!*
Rudolph set about hatching a plan to woo Ruby, his ex wife, back.
He couldn’t just go and see her, because of the restraining order, he couldn’t phone her, because he wouldn’t know what to say and he couldn’t write because it would take too long to get to her.
“I know!” He suddenly thought, “I’ll email her a video message…but with a difference”.
(Erm, no ladies and gents, not a video like ‘that’…filthy bunch. Just wait and see).
Rudolph made a start on grooming himself to make sure he was looking tip-top.
He brushed his fur, he steam ironed his scarf and polished his antlers (no, that’s not a euphemism).
He went downstairs and setup the laptop to record himself and cleared a space in the living room.
He needed plenty of room for this…
Rudolph had decided, the best way to win back Ruby was via the medium of dance. When they first met, Rudolph was breakdancing in a nightclub and his antler spin won Ruby over. He figured that if she could see how hard he’s trying to get back in shape, and he performed this special dance move, she might see how serious he is and agree to meeting up.
He turned the camera to record, turned on their favourite song, ‘Baby got Back’ (they had it as their wedding dance, it was really romantic) and began busting out his dance moves.
First a back flip, then a knee slide, a section of the running deer, the splits and then, to finish, the Antler Spin.
He finished the routine and blew a kiss to the camera, followed by a cheeky wink for good measure.
He then explained to Ruby that he loves her and that he’s sorting himself out so they can be a family again.
This had to work.
He watched it back and then took a deep breath and pressed send.
That was that. He could do no more other than sit and wait, and daydream about how Ruby must be thinking of him and her, and being overwhelmed by his amazing dance moves.
He had a celebratory Carrot and set about his fitness regime for the afternoon.
………….
Meanwhile, at Lap Land, the club, not the place, Big Brown Bear was in a spot of bother with this Gruffalo chap. What are the chances?! Turns out that The Gruffalo’s blonde girlfriend was one of Bears dancers last night and the whole ‘naked’ thing hadn’t gone down too well with Mr Gruffalo. Awkward…
Bear was now experiencing a Gruffalo headlock whilst Blondie looked on helplessly, getting frostbite in all sorts of places.
That’ll teach you Brown Bear… 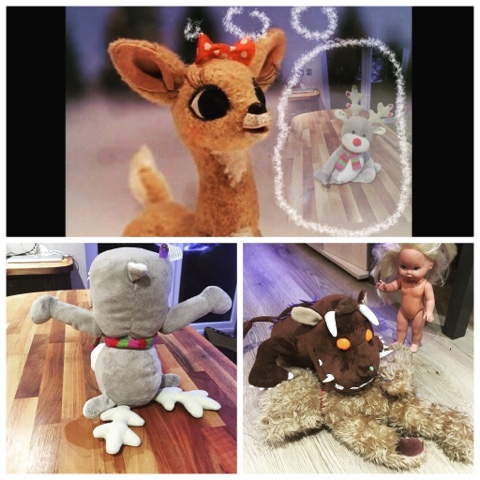