After 24 hours of anxious waiting, Rudolph still had no reply from his ex wife, Ruby.

He made sure the email that he’d previously sent her had a read receipt on it, so he knew that she had seen/watched it…she just hadn’t bothered responding.
“She’s probably just busy…” Rudolph reassured himself. (That’s it old chap, you keep your spirits up and stay optimistic…or as I like to call it, deluding yourself. Us adults are experts in this field, I find I’m most affected by delusion when I’m telling myself I’m doing well at this parenting malarkey…and then my toddler almost smears his upset tummy poop on a best friends cream carpet and then proceeds to eat all the low hanging chocolates off her Christmas tree. #ferral #passthegin).
Rudolph could hardly concentrate on anything else, he was checking his email every 2 minutes in the hope he would see something pop in his inbox, but all he had received was a PayPal account statement, an email about a 2 for 1 deal at Zizzi’s and another one from someone called Abimi who is claiming that Rudolph has won the Cambodian Lotto. Lucky Rudy eh?! What are the chances? Especially when he’d never done the lotto in Cambodia before…
To take his mind off waiting for a response, Rudolph decided to play his guitar (which wasn’t easy when you have hooves…it’s like trying to play with boxing gloves on) and sing a song that reminded him of Ruby.
He sang, “I’ve been waiting for a girl like you”, by Foreigner (lighters in the air, what an 80s power rock anthem) at the top of his voice.
He sang so loudly the Windows began to shake and he even managed to disturb Big Brown Bear who was about to tuck into a tart (will you lot stop this now please!! You and your smutty minds!! I meant a delicate pastry tart*, not a Blonde Lap Dancer!!!)
*I would just like to add that a lovely friend had, this afternoon, made some delicious mince pie tarts with a bit of a twist for a festive gathering.
When quizzed as to what said pastry was, the answer that came back was, “it’s a flangipane”.
Yes, that’s right, FLANGIPANE. It’s like Frangipane but with a touch more flange.
I hasten to add that they were delicious, despite the flange.
The lyrics to the song resonated strongly with Rudolph and at the end, he shed a little tear. He missed Ruby so much.
“Haha! What a pansy you are Rudy!” Big Brown Bear told Rudolph supportively, (note sarcasm) “come here for a Big old Bear hug, but mind my tart…”
Maybe you’ll hear from her tomorrow Rudolph. Let’s wait and see.
(Cue Foreigner and wind/smoke machines…) 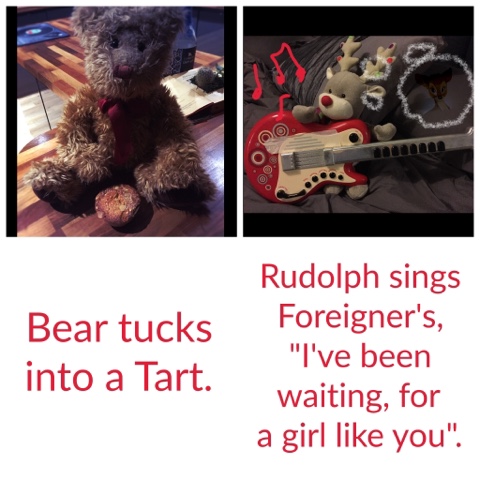