Rudoloh’s decision was made. He had to stand up and fight. Go hard or go home.
In the words of Rambo, “Live for nothing, or die for something”, and he had chosen the latter.
Hid behind the cover of the wishing rock, he took his cashmere scarf off, tied it around his head m, made 15 snowballs and pulled out his nerf gun (we don’t condone the use of guns whatsoever, we firmly believe that if everyone in America and suchlike replaced real guns with nerf ones, the world would be a far better place) and he was ready to kick some Reindeer rump.
Just as Blitzen kisses Ruby, Rudolph seized his chance.
He leapt out from behind the wishing rock and unleashed all 5 suction cup bullets at Blitzen.
Pow, pow, pow!!!
3 got him on the antlers, 1 went on his nose and one on his butt. They did no damage but they did shock him so much he was rendered speechless and immobile, just what Rudolph needed.
Rudolph then activated project whiteout. A relentless tirade of snowballs, unleashed with all his fury and might.
Kaboom!
All 15 smacked Blitzen in the face and he he fell to the ground like a sack of…presents (you thought I was going to say shi* there didn’t you…what a surprise eh?!)
Finally, Rudolph picked up the wishing rock and launched it through the air where it then came crashing down on Blitzen’s head.
“What the hell are you doing?!” Screamed Ruby as Rudolph army rolled across the ground like a furry ninja.
“Have you lost your mind?!”
“No my dear, quite the opposite” he replied and straightened out his headscarf.
“Ruby, Look, i don’t know what’s happened because I got an email from you saying to meet you here and then I arrive to find you hooking up with this meathead. That’s irrelevant now because I’m here to tell you I love you and, although I’ve had my problems, I’ve sorted myself out and this idiot lying on the snow is not the deer for you. I am”.
Rudolph pleaded.
“I never sent an email…” Said Ruby.
“No, I did” said Blitzen.
“I knew he was desperate and I knew he’d come if i pretended to be you, Ruby. I wanted him to see me win you back and I wanted to see him cry” Blitzen sobbed.
“I’m so sorry Ruby!!”
“You complete arsehole!!” Screamed Ruby, “how dare you! You’ve violated my privacy, you’ve lied to me and you’ve taked advantage of Rudy when he’s at his most vulnerable. Shame on you! I never want to see you again Blitzen!”
Blitzen was left sobbing into the snow and had snot running down his face into his mouth.
“Thank you Ruby…” Replied Rudolph, “I really appreciate what you’ve just said”.
“No problem Rudy, you didn’t deserve this. But do me a favour, take your scarf off your head and put the nerf gun down will you…there’s a good boy” Ruby asked.
“Anything for you Rubes”. He replied.
Within 5 minutes the Elf and Safety Executive had arrived on the scene and so had the Elf Police.
Blitzen was arrested and taken away on the trailer cart in hoof cuffs.
It turns out he was on the run as he’d broken the rules of his parole and he was a wanted deer.
He was interviewed by the FBI and pleaded guilty to steroid use during his time in Santa’s troupe (done for FUI – Flying under the influence) and was sentenced to 2 years in Jail.
And Rudolph and Ruby…
(Tune in tomorrow – what a hoof hanger ending!!) 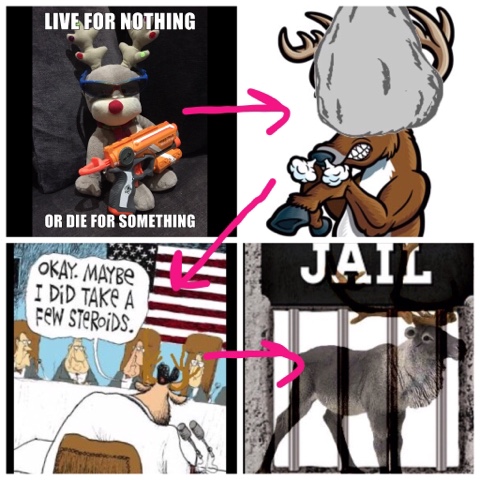