“Oh my god!!” thought Rudolph, “what the hell am I going to do with this great big hairy excuse for a friend in the middle of my living room floor…?!”
Ruby didn’t like Big Brown Bear very much, she thought he had been a bad influence on Rudolph during his troubled spell and vowed that if she saw him ever again, she would go mad with rage.
Even though Big Brown Bear had been there for Rudolph during the hard times, he had always been that friend to say, “just one more beer…go on!” and that ‘one beer’ would turn into 7 (yeah, I know, we’ve all been there/heard that one before and had the willpower of a child at Christmas who has unwittingly stumbled on their Christmas presents – “to peek or not to peek, that is the question…” Peek goddamnit! Peek!!)
Rudolph panicked, then ran and found a load of washing from upstairs and threw it over Big Brown Bear to disguise him as a pile of laundry before going to answer the door. He was so comatosed, Rudolph was certain he wouldn’t wake up…
“Hello Rubes! Hello kids!” shouted Rudolph as he threw his arms open wide to catch his 3 children, Reggie, Rosie and Rupert who were hurtling towards him.
“Kids! Oh my goodness, I’ve missed you so much!” Rudolph exclaimed.
“Daddy!” they all shouted in unison as they landed in a heap on the floor cuddling.
Ruby stood there at the door smiling, her family back together, and Rudolph had never felt happier.
Then, Ruby looked confused and then angry.
“Erm, Rudy, why is your nose glowing? Doesn’t it only do that when you’ve had a beer?? You haven’t have you?!”
Oh god…think fast you stupid pillock…how are you going to get out of this one?!
“Haha!” He laughed, nervously, “nope, no beer here, I haven’t touched the stuff for weeks…I had an allergic reaction to some facial cleanser a moment ago that has alcohol in it” (good one Rudy! What a cunning fib, I’ll have to remember and use that one myself over Christmas when my cheeks get a bit rosy from the gin…)
Ruby looked at Rudolph suspiciously but then laughed and shook her head.
“You silly old fool!” she exclaimed, “I’ve told you before to use alcohol free. Ruins your complexion otherwise!”
Rudolph let out an internal sigh of relief and gave himself an imaginary slap around the face (I do that a lot when people piss me off. Despite the fact I’m only imagining giving them a little slap on the chops, it still makes me feel a bit better about life…)
That was too close for comfort.
The kids went off to play and were charging around the house giggling their heads off then, before he could say anything, the little one, Rupert, shouted, “Geronimo!!! Weeeee!” as he leapt into the enormous heap of washing.
It all happened in slow motion…and there was chuff all Rudolph could do about it.
“Nooooooo!” shouted Rudolph.
But it was too late. Little Rupert’s legs were poking out of the laundry heap and all of a sudden, an enormous growl could be heard from the washing pile.
Ruby threw a death stare in Rudolph’s direction and he could do nothing but look sheepish and shrug his shoulders.
And with that, a fuzzy, disheveled Big Brown Bear appeared from out of the washing heap and uttered the words, “what the f*%k is going on?” whilst holding a half full bottle of beer and with the older two kids gawping on in horror and bemusement.
Little Rupert then popped his head up and laughed with glee whilst exclaiming, “That was fun Daddy! I want to do it again! Hehehe! Daddy, what does f%*k mean?”
Good luck getting out of this one Rudolph… 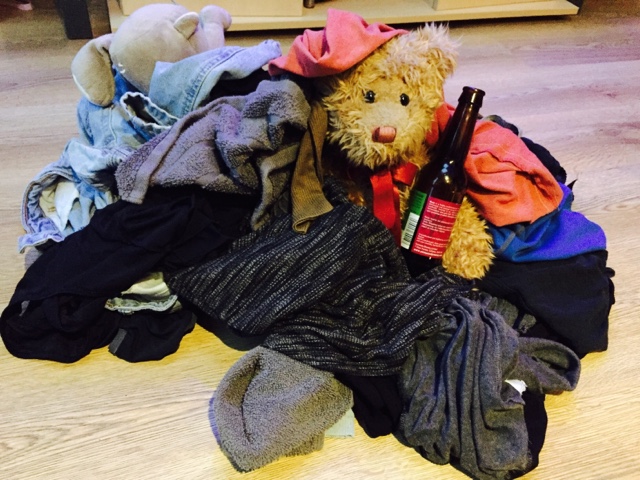