My husband is a Liverpool Supporter.
I am a (whisper it at the moment) Chelsea supporter.
It’s been pretty tough of late as a Chelsea fan.
He has always said I’m a terrible winner and I wind him up to the brink of madness when Chelsea play Liverpool and we win, or we get a good result and they don’t. This results in him wanting to smash me over the head with one of those comedy sugar glass bottles and make me sleep in the kids playhouse in the garden for the foreseeable.
I don’t think I do behave like that (obviously. He’s just an angry northerner who is just as bad himself) and I certainly do not behave like at the moment when our results have been so bad.
Chelsea’s results of late have given him cause to become one of the most smug and annoying people to live with.
So, as payback, I made a pie for dinner.
Which he is just about to eat.
He doesn’t know how I’ve decorated it.
I like to call it ‘humble pie’ as Liverpool just lost to Crystal palace 1-2.
Who says I’m a bad looser… 😉 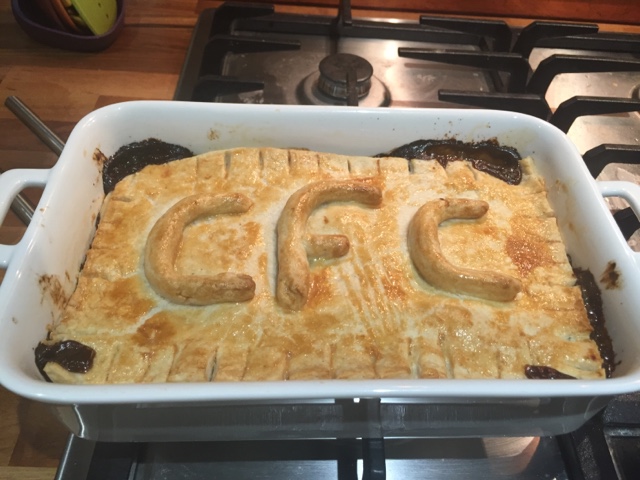