Checklist: Is your child gifted?

Not sure? Just answer the following questions to find out!*

*Disclaimer: These questions are not scientifically proven to give any valid outcome or opinion and do not guarantee your child entry to the best private school in the land. Sorry about that.

Most, but not all, of the following questions apply equally well to children of various ages. No one child will exhibit all of these. They are intended to serve as a checklist of the abilities revealed by many gifted children.

No. But he did crawl backwards only for about a month…like a baby moonwalk. Michael Jackson would’ve been very proud of it.

Yes, but only when he’s having a tantrum. He really is quite eloquent when he’s fired up. Things that can cause outrage in a child are when Peppa Pig has finished or when he wants crap food.

Yes. He learnt that Clocks are very useful things for grown ups to use in order to stop them from getting cross. Clocks can prevent the grown ups from shouting phrases like, “get the hell up!”, or, “we’re chuffing late again!”, so he does like to hide my watch and reset the alarm clock every now and then so the time is wrong on it in order to keep me on my toes. The cheeky scamp!

He likes jigsaw puzzles very much. The way the layers of paper they’re made out of pull apart is very interesting and they must taste really quite delicious (kind of like a Ryvita I imagine) as he’s always chomping on them. They must have some nutritional benefit, surely?

Yes. I think he does as he seems to love seeing the numbers 2, 3 and 4. He wakes up to see them showing on the clock most nights just to get his ‘favourite number fix’. Yawn.

Yes, again! Mainly newspapers and broadsheets. The noise they make when you stamp on them and the mess you can make by ripping them up are some of his favourite things to do. He also likes to rip the pages out of books, I think to alter the version of events if he’s decided he’s bored of the same outcome each time we read it.

Yes. Mainly how his pee comes out of his winkle and what happens when you flush a toilet. He’s often found posting items down it and watching them ‘magically disappear’ when he pushes the special button. He also likes playing with food and transferring contents from once container to another, like cereal from his bowl into my candles, that sort of thing.

This is a yes. He can wrestle me onto the ground in a matter of seconds and can go all day with very little sleep. It would appear that he only requires 4 hours sleep at the most per each 24 hours. He can also run like roadrunner for a good length of time if mummy is shouting, “stop!”. His endurance is really quite splendid. Puts Forrest Gump to shame that’s for sure…

Yes. He loves playing with his older siblings, especially games like, “Sit on their heads”, and, “How many times can I get away with hitting them before mummy looses her shizzle”. He rarely leaves them alone and he is stuck next to me (his mum) for approximately 20 hours of the day. I’d say he’s a real people person….

Yes. He is really bossy (doesn’t get that trait from me of course) and if he’s not listened to, he may perform a marital arts move, such as a chin hold, on you until you agree to partake in his choice of activity. He has marvelous powers of persuasion.

He certainly does. He knows exactly where I’ve hidden the special Christmas chocolates and he’s also brilliant at remembering all the things I’ve told him not to play with (dishwasher, DVD player, makeup, scissors, etc) and makes a conscious effort to seek these things out.

Very much so. I think he has Jedi mind powers. Just one look can render me utterly powerless and the biscuit I’d just said he couldn’t have often finds its way into his hand.

Yes. He plans his nightly wake-up schedule quite far in advance. He pushes me until he sees that I’m at point break, and about to have a nervous breakdown due to sleep deprivation, then he will then sleep through that night so I can regroup myself before the cycle starts again.

Yes. He has figured out how to eject the drawer on he DVD player and put it away again. He also knows that small items, such as Cheerios, fit into small spaces. Therefore the past information of the DVD drawer opening and closing has been added to the new knowledge of small things fitting in small spaces and he has now put the two things together. Incidentally, it turns out DVD players don’t like Cheerios much…

Yes. He is very creative. He often partakes in unusual creative activities such as modern art. Our latest creation was called, “Coffee by candlelight” and can be seen here… We are entering it for the Turner Prize this year and believe he stands a good chance of winning as he’s up against a broken plastic garden chair and a cow pat set in concrete.

“Coffee by Candlelight” by Ben

Yes. He can scream for at least 2 hours without stopping. Again, his stamina is something to behold. 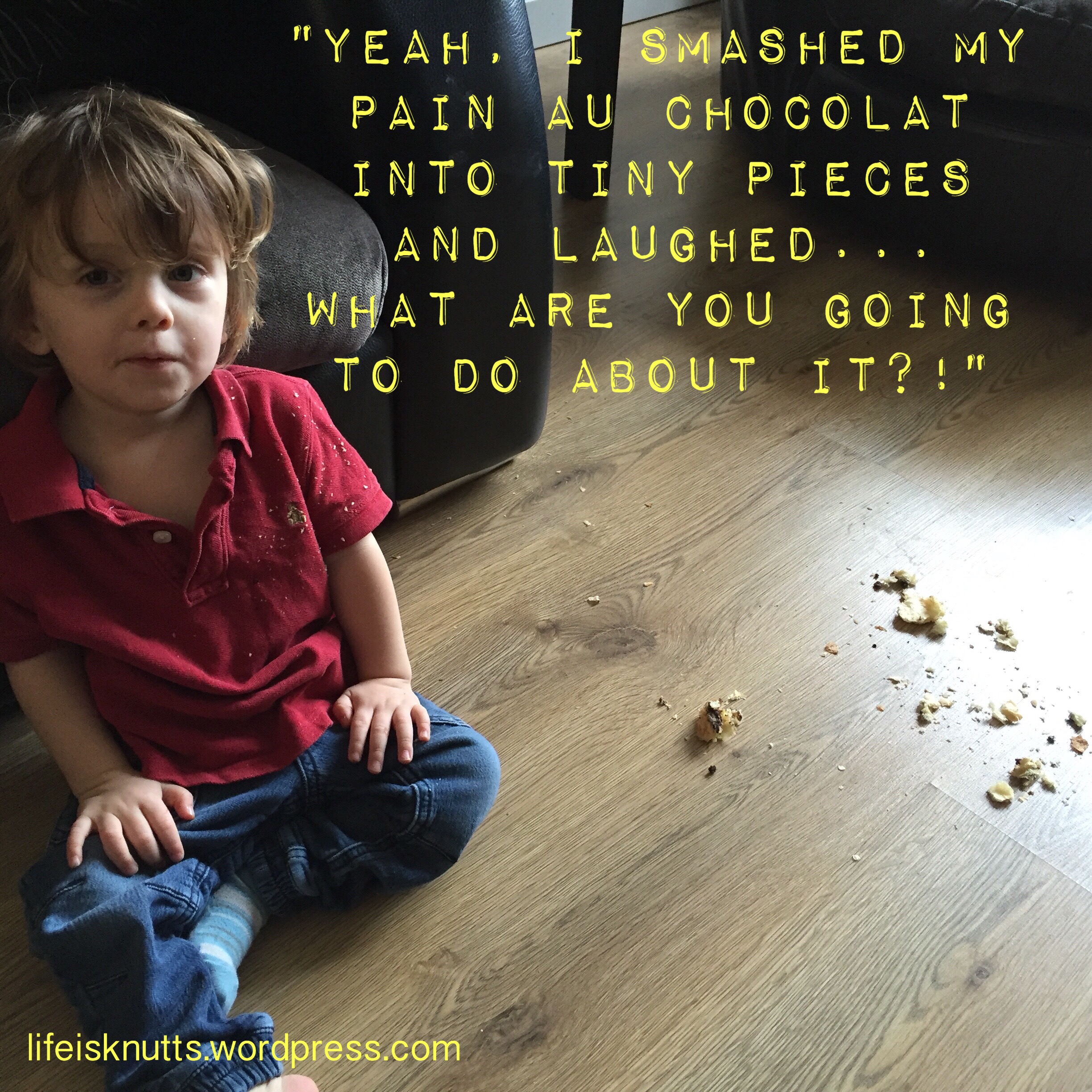 Oh yes. No amount of shouting, pleading, crying, blood offerings, bribery or promises of money from myself will stop my toddler from doing what it is he’s set his mind to. He’s not a giver-upper.

Yes. A sadistic one. He likes to see me shout and loose my sh&% for his own personal pleasure. I’d say that’s pretty advanced…

Yes. But sadly we can’t understand most of what he’s saying or doing. It’s very contemporary, interpretive stuff. We do know however that most stories involve, “mumma, dadda, gray-gray, Nan-nan, grandad and Peppa Pig”.

So, here endeth the questions.

Well, in conclusion, based on the above answers, my child is 100% genius.

Who knew. I certainly didn’t…. 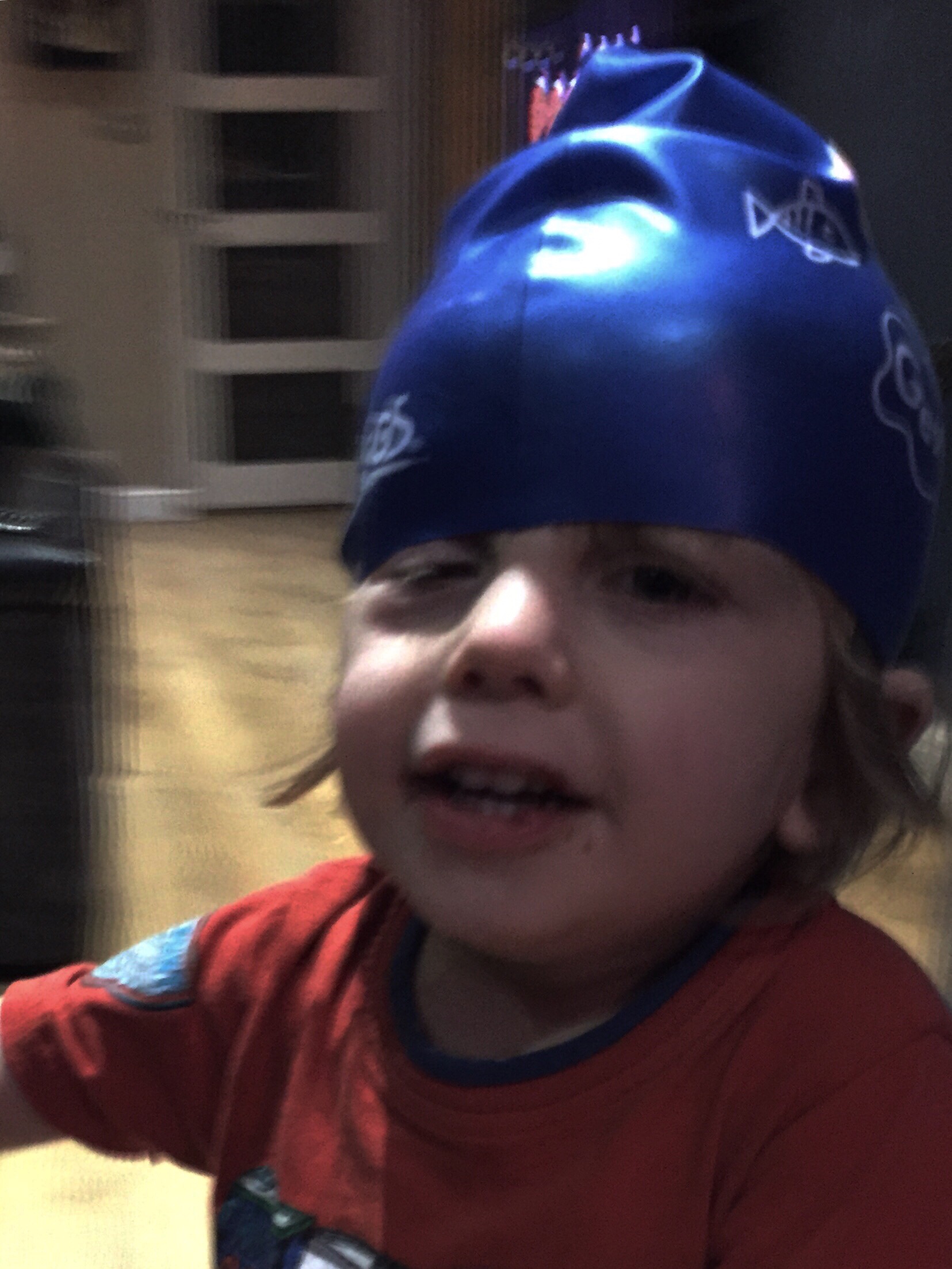 I have no words…he looks like his Dad in this one.