As the title suggests, this is a ‘helpful’ post for those of you out there who;

A) Want to avoid certain gifts as your child has a birthday coming up and you’d like to keep your sanity.

B) Have a birthday party to go to and you don’t really like the child (or their family) so want to get them a nightmare of a gift (yes, I believe people like this really exsist).

C) You’re an Aunt/Uncle/Godparent/Good friend and want to really piss off your brother/sister/best friend without fear of repercussion because you don’t have children.

If any of the above apply to you, you’ve come to the right place!

Without further ado, here we go… 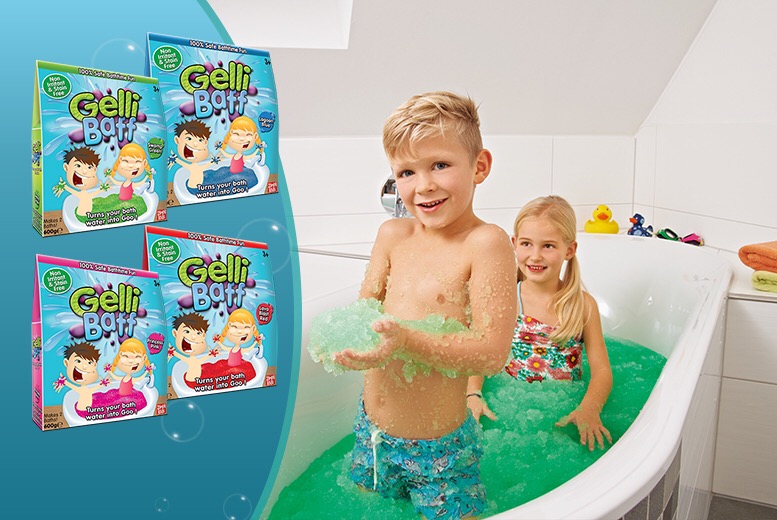 Gelli Baff is sold all over the place. It’s the kind of item your kids see advertised on TV, or on the shelf in Toys R Us, whine their heads off about trying so you cave in, but then instantly regret doing so because it’s POINTLESS and MESSY and causes DRAIN BLOCKAGES! (If however all of those reasons listed above sound fun, feel free to buy some).

It normally says to add 1 inch of water per packet of Gelli Baff. Normally you only get one packet in each box, so if your children are dreaming of a bath full of the stuff (as per the advert) you’ll need to spend at least £40 and buy at least 15 boxes to get the full, “this stuff is the work of the devil” effect…

My experience of this stuff was not great (if you haven’t guessed that already). The kids flicked it at each other and it was stuck in their hair and around my bathroom for weeks. It was like there’d been an explosion in a Haribo factory.

It also wouldn’t dissolve after use (this is explained below) so I had to scoop it all out of my bath manually through fear of blocking the drains and having to get someone out to unblock them at a cost of £500/hour.

It comes with a packet of dissolving crystals which you’re mean to tip in at the end to return the lumpy jelly back to a liquid so it can go down the drain. This WILL NOT WORK. You will have to scoop it all out of your bath into a bucket and dispose of it some other way (maybe bury it in a hole in the garden and grow some mutant strain of flowers or bottle it up as a new designer anti-aging product perhaps?)

A cheap present which can cause extensive destruction and possible loss of sanity.

Now, these things have been on the go since I was a kid (but I only ever did them at a friends house, I was never in possession of any of these things and now I know why…sensible mother, very sensible).

Kids, unfortunately, love these things. You stick the beads on a little peg board in the pattern/picture of your choice and then, once finished, you put some waxed paper on the top and iron it until the beads can’t take the heat anymore (much like me when my kids have asked to play with said beads) and melt together to create a picture.

The principle of these things is fun and creative. The reality is anything but.

The beads are tiny, so you can only play with them if there are no babies or toddlers around. Your child required a certain amount of common sense, patience and trust to play with these things, if your child doesn’t possess all of these qualities, bin the beads!!!

I know this because I trusted my then 5 year old to play with these Hama Beads (supervised still) because I deemed him sensible enough to know not to put them anywhere other than the peg board. Mistake. Assumption leads to failure, I’ve told you all this before.

After playing with the things nicely for 10 minutes, my child looked at me and pointed, looking rather worried, at his nose. I knew straight away what had happened and yes, a bright pink Hama Bead had been firmly insterted up his right nostril. I tried to get him to blow his nose hard but before each blow he breathed in so deeply it made the bead disappear further up his nose. What a plonker. After 10 minutes of panic, nose blowing, looking up his nose with a torch and crying, I managed to get the bead out with some tweezers (yes, I know, I could’ve pushed it further up blah blah blah, but I was panicking!! It did the job and saved a trip to A&E anyway…

Another reason these things are a nightmare is the perilous transition of the unstable creation from work table to ironing board. I’ve lost count of how many times I’ve got the shakes (through nerves, not lack of Gin), put it down on the ironing board too hard or tripped over something, resulting in all the beads falling off and my kids having a mental breakdown (“you’re the worst mum ever!!!”) because I’ve destroyed their hard work.

All in all, I’d say these are a pretty great toy to buy if you want to cause disruption to a day’s plans by having to visit your local hospital due to one being stuck in an orifice or you’ve burnt yourself trying to iron the buggers together.

Buy Hama Beads here (call 111 or start the car ready for a trip to A&E in advance as likelihood of injury is almost certain…)
Review 3: Moon Sand

My last review is of this stuff. Moon Sand.

It’s a mutant substance which looks like sand, sticks like playdoh and then crumbles again when picked at (or hit with a fist). It also smells of plastic and will leave your hands smelling like it for a day or two as well.

The sand stuff itself comes in plastic bags and, depending on which set you buy, it also comes with Moulds, mini tools and toys to hide/stick in the sand.

One of my boys got this dinosaur one for his 4th birthday and it was a nightmare.

He was Dino obsessed at the time, so the thought of being a paleontologist digging for Dino bones in the ‘sand’ was super exciting. I knew the stuff would be messy so i prepared myself as best I could with table cloths, Apron, dustpan and brush and gin.

The sand itself stains. If you get it on any clothing or surface, it WILL end up that colour for a few months. You have been warned. I think that, because it’s kind of sticky, it adheres itself to pretty much any material pretty well and it also likes hair. It’ll stick to that pretty well and attach itself to your child’s scalp for a few weeks at least.

Also, it’s sand. Sand is a bugger at the best of times, even when it’s outside. Who the sodding hell thought that letting kids play with it indoors was a good idea?! It got flicked around everywhere in a Dino excavation frenzy and I was finding green sand on the floor and down the sofa for weeks afterwards. From now on, this is an outdoor activity and the stuff is never to set foot indoors again. Moon sand Status: Extinct.

Buy Moon Sand here (and if buying as a gift for someone’s child, move to a different location without telling anyone where you have gone)

So there we have it folks. My top 3 gifts for children, guaranteed to piss parents off.

You have been warned.

I hope you found these comprehensive reviews useful and if you happen to be in possession of any of these items, do yourself a favour, either bin them or wrap them up and give them to someone as a gift….then run for the hills!!!!