Things Mum’s do at the Weekend…

One for the Mums… X

Back in 2012, myself and Mr Knutts got hitched. We have been together since 2005, but kids coming along before a proposal (shock! Horror! Gasp!) put pay to a wedding for a little while (as did me looking and feeling like a beached whale) and we ended up waiting.

We chose Iceland as a Honeymoon destination as we’ve always wanted to see the Northern Light and it looked like a magical place. It truly was.

However, as always where we are concerned, the trip wasn’t without its moments and I felt so compelled to share them with everyone I began writing on my Facebook page. This is where my ‘blogging’ began.

Here is day 1 from our Honeymoon, enjoy!

(Excuse the typos in the text below, I can’t seem to change them and I guess it adds to the drama to show how much I was in shock! 😂)

Day 1 of Honeymoon in Iceland: Flight went ok until we were about to land. Pilot comes on and says there is too much snow on the runway and we can’t land so we are taking a diversion to the north of Iceland to land there. oh well, we are only 300 miles from where we should be but never mind. A small hitch. We land and refuel and sit on the plane for an hour. The pilot come back on and says we will now be able to land in Keflavik so we shall be leaving shortly. off we go again. after a 45 minute flight back to Keflavik we land (4 hours late!) get our bags and go to find our hire car man who we paid to meet us at the airport. Ah. No man there. Its 8pm, on a Monday, in an airport and everywhere is shut. No car waiting for us. After 30 minutes of searching about outside in the blizzard like conditions, we give up. We go to the only remaining car hire booth open and get given a vw polo to use. at least we have a car right…? Off we go. we set the sat nav for the hotel (a 1hr 15min journey) and set off into the Icelandic night…and snow. The major ‘Route 1’ was covered in snow and ice. The vw was no longer a car but a mini ice skate on the road. This could be a long journey…

We navigate our way through Reykjavik and out into the mountains. The wind is so wild it’s blowing the car and whipping all the snow into a frenzy. We arrive at a junction 20 minutes from our hotel. We can either go under the fjord through a new toll tunnel or around the fjord on a road through the mountains. Chris asks me what i think. I say id rather go through the tunnel but its up to him. Chris decides we will go around it. Im likening this to a movie and have decided this was our ‘finding nemo’ moment.

Gemma (aka Dory): Theres a tunnel. I think we should go through it, not over it.

Chris (aka Marlin): Bad tunnel. we have to pay the other end. let’s go round. it’ll be fine.

Gemma (aka Dory): Ok then…if you say so.

25 minutes around the fjord the wind is blowing the snow so much we can’t see the safety pillars. I don’t like this very much.

We push on but on the way up a hill we see an abandoned car. ominous I think. this is like the moment Dory and Marlin see the Jelly Fish…not good. Chris drives on and 2 minutes later, smack. The snow becomes so deep the car is imbedded in it and we can go no further. After 10 minutes trying to get ourselves out we finally manage to reverse and we go back the way we came. After a 25 minute drive we arrive at the junction for the tunnel again. Let’s go through it says Chris.

We arrive at the hotel at 11:30pm – 5.5 hours later than we should have. The road to the hotel in on a steep hill. we start going up it but alas, we get stuck in the snow again. we phone the hotel for help and they send down a truck. they tell us to leave our car at the bottom and they drive us and our luggage up to the villa at the hotel. We haven’t eaten since 11am and we are self catering. oh bugger. no way we can get to the shops even if they were open.

The guy settles us in and then delivers an amazing toasted bacon sandwich and bottle of wine and lights loads of candles. Thats better, wine always helps. Adventure for day one done.

Conversation with a 21 month old… 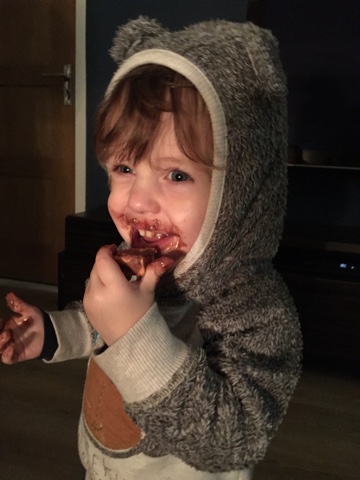 The force is (not so) strong in this one…

An attempt at making some Star Wars paper snowflakes for the kids.

I could’ve done with the help of ‘The Force’ as they were a chuffing nightmare to do but sadly I only had wine…it did seem to help a little. 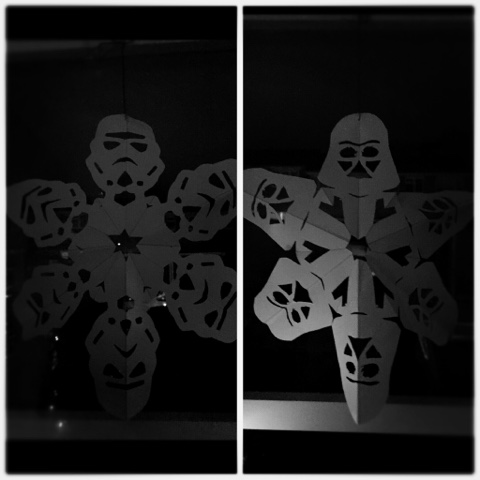