Morning came and Rudolph zoomed downstairs faster than a mum when there is silent children ‘playing’ (never trust the sound of silence, ever. I did today and I found Tasmanian Toddler on the sofa, with his nappy off, and poo on said sofa. Needless to say he wasn’t the only one to loose some sh*%…)

Rudolph turned his laptop on and ‘ping!’ in came an email from Ruby.
“Oh my goodness!” exclaimed Rudolph, “she’s actually replied!”
At first he was overjoyed.
Then nervous.
And then he threw up.
He wanted so badly to read what it said but he couldn’t pluck up the courage to do it.
Big Brown Bear appeared (his face still covered in last nights tart – again, please folks, if you didn’t read last nights installment the tart I’m on about is made of pastry…for a change) and he sat down next to Rudolph.
“I’ll read it with you mate” said Bear, “it’ll be ok. You wait and see”.
They clicked on the email and upon looking it just read, “meet me by the edge of the forest, near the wishing rock, at 12pm”.
The wishing rock is a rock (well, duh!) which is steeped in mythology and history. It’s said that if you visit the rock and kneel down and touch it, your wish will come true. Simple eh?!
(I’d probably wish for either, a well behaved toddler, a visit to the toilet in peace and quiet or a lifetime supply of gin…oh, who am I kidding, Gin! Go with the gin!)
“See!” Said Bear, “I told you!”
“But that could mean anything Bear!” Said Rudolph, “what if it’s to give me some bad news or to let me down?”
“Well, I can’t help you with that chap but I can promise you I’ll be waiting here at home for you with a beer, whatever the outcome” Replied Bear.
Rudolph went and put on his scarf and polished his hooves. He was dressed to impress.
His muscle definition was comparable to that of a Russian weightlifter and he was looking hot to trot (do reindeer trot…? I guess so, in that case, that’s classed as a joke. Cue laughter…)
“Wish me luck Bear!” Rudolph shouted.
“You go get her tiger!” He replied.
Rudolph walked through the snow covered forest, the sun beamed through the trees and made the snow twinkle like glitter, or like bubbles in a gin and tonic.
He stood next to the wishing stone and waited.
After 19 minutes and 45 seconds (not that he was counting) there was still no sign of Ruby, but then he heard the sound of hooves in the snow. Not dainty Ruby hooves however, great big man hooves…
Rudolph peered from behind the wishing rock.
It was Blitzen.
“What the hell is he doing here?!” Thought Rudolph.
He panicked and hid behind the rock, but positioned himself so he could peep over the top.
The next thing he saw then was Ruby, in all her slender, glossy coated glory.
But she didn’t head for the wishing rock, she headed for Blitzen!
Rudoloh’s heart sank but he continued to peer over the rock to see what was happening.
“I’m so sorry Ruby,” Blitzen said, “it was a mistake, one I’ll never make again, but I’ve been to rehab and if I ever got offered those performance enhancing drugs again I’d say no, no, no (love a bit of Amy Winehouse) I love you Ruby…”
And with that, Ruby leant forwards and they kissed.
At that moment, Rudolph’s heart shattered into a trillion pieces and his antlers burnt with rage.
He was torn, should he stay behind this rock until they leave, or should he go over there and punch the living day lights out of this wife stealing hunk of meat whilst strangling him with his cashmere scarf?
And with that Rudolph…
Duff. Duff. Duff. Duff. Duff. Duff. Duff. Duff. (Think Eastenders ‘cliffhanger’ moment…)
Tune in tomorrow to find out if he should stay, or if he should go (also love a bit of The Clash). 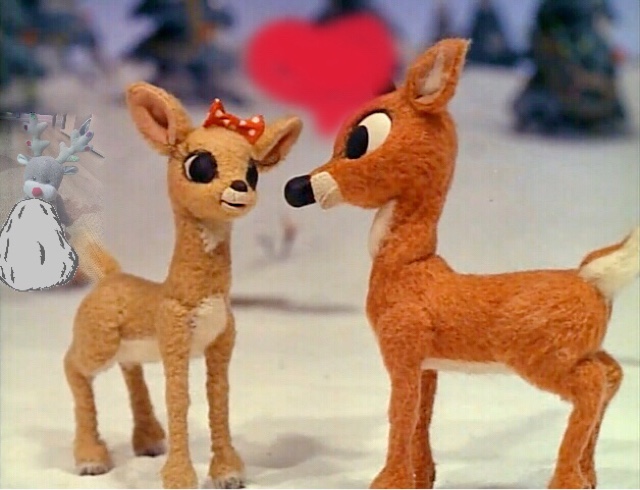